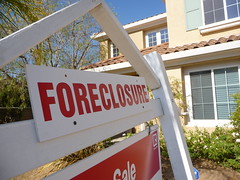 Did you ever wonder why banks seem to approve so few loan modifications and often just foreclose instead? For any home owner, that seems ludicrous. Any rational person would think, “Why can’t they just fix my adjustable rate mortgage at today’s rate and keep me in my home and paying my mortgage? Why would they want to risk having me stop making my payments and incur all those legal fees associated with a foreclosure? Aren’t there government programs that incentivize banks to work with home owners to modify loans?” But you are a rational person, not an insider at the bank. It’s whole different story if you know which rock to turn over.

The cold, hard truth is banks may make more money when they foreclose on a house than when they modify its loan. At this point, it becomes relevant to distinguish between a loan servicer and the investor that actually owns the debt. For example, Bank of America may collect the monthly payments but not own the actual loan. B of A is often only the servicer for an investor who coughed up the cash (or bought the mortgage backed security) for the actual loan amount. Loan servicers (B of A in this example) may make more money when the property forecloses. Being professional paper-pushers, they slap delinquent accounts with late fees, legal fees and other random “processing” fees. If the home forecloses, those back fees must be paid because the servicer is pretty high on the food chain of lien holders. If a loan is modified, often the servicer must waive those junk fees or roll them into the modification agreement. If the fees are rolled into the loan, the servicer gets paid back over the course of 30 years as the borrower pays off their mortgage. The servicer who is not only processing your monthly payments but also handling all your loan modification paperwork asks themselves: “Would I like all my money paid in full soon or potentially have to waive all my fees to process this modification?” To take it a step further, if the investor agrees to modify the loan from 6% to 5% interest rate, the servicer loses money over the long run too. These are the people processing the loan modification applications. No wonder they “lose” so much paperwork from well-intentioned borrowers.

To answer the question “Aren’t there government programs that incentivize banks to work with home owners to modify loans?”…well yes. The Home Affordable Program (HAMP), birthday March 2009, offers banks between $500 and $1500 to work out a loan modification with home owners. Let’s do the math. Thousands of dollars’ worth of junk fees waived + a reduced interest rate = let’s just say it’s more than $500 – $1500. I’m pretty sure servicers can do that math. (Source: HAMP Compensation Matrix, updated Nov 9, 2010).

Let’s consider the investor who is neatly tucked behind the servicer. The servicer is out in front taking all the heat from consumers and the press because they think that servicer actually owns the loans they process payments for. That investor isn’t stupid. They insured the loan on the property in the first place. (Think: AIG). When the house forecloses, it’s very likely the investor is paid in full by their handy insurance policy. That’s why we buy insurance, right? Then when that house goes up for sale on the courthouse steps, that investor (or sometimes the servicer) sends out their people to “buy it back”, so it becomes a “bank-owned property”. If there is no one else bidding on the home, they buy it back well under market value. Then they list the property as an REO / bank-owned property and sell it. As the owner/seller, they bank the profit. Then…this is the gross part…if the home owner refinanced that loan at any point, the investor can also sell the borrower’s “debt forgiveness” to debt buyers for pennies on the dollar. See: http://en.wikipedia.org/wiki/Recourse_debt They can sell the right to collect on that “shortfall” to some vultures for a couple thousand dollars that then have the right to pursue the unfortunate borrower until the day they die. I am not being dramatic here. There is literally no statute of limitations on how long the debt buyer (aka collection agency) has to pursue that borrower. The debt buyer who paid $1000 for the loan then has a tremendous opportunity to make a killing trying to collect as much as they can wring out of the borrower. The grand finale: the investor reports the re-financed loan’s shortfall to the IRS as income to the borrower. Let’s do the math. Insurance pay-out + profit from selling the house as a bank owned property + a little cash on the back end to peddle it to a debt buyer = let’s just say it’s more than $500 to $1500. I’m pretty sure the investors, like their buddies on the servicing end, can do that math.

The media rages: “Why isn’t the HAMP program helping more people stay in their homes? It’s an utter failure! It doesn’t make sense!” Right, it doesn’t make sense to the banks either. Can you imagine what the government would have to pony up to compete with the profitability equation the banks enjoy when they foreclose on a house? If people thought the TARP bailout was over the top, it would pale in comparison.

Just a few ideas about why the banks (servicers and investors) might choose to foreclose on a home rather than modify the loan. My guess is this is just the tip of the iceberg.

Not Your Mama’s Apple Pie

Selling and Buying in the age of COVID 19

Got a question about this property?